Electricity pricing trends moving in the last half of 2018

Since the start of 2018, Cal 19 wholesale electricity prices on the National Electricity Market (NEM), for the most part, tracked optimistically downwards. Only South Australia continuing to experience price increases until it peaked at $95.23/MW in late Feb 2018; whereby it then followed the other States within NEM.

As the end of the 2018 financial year approached, wholesale electricity prices in the NEM started to buck the downward trend and prices pushed back upwards substantially in all states.

Futures prices in all states were trending downwards by a few percentage points in June and early July, mostly due to the number of large-scale renewable energy projects coming on line in the first half of 2018. This trend however began to reverse itself towards the second week of July as the NEM experienced a reduction of generated electricity, predominately due to the failure of several coal-fired plants.

Over the week ending Friday 8 June, 4,700MW of coal units across the Eastern states failed with NSW losing 3,800MW of generation capacity – nearly a third of its 12,000MW installed coal generation capacity, raising the threat of blackouts. In NSW, Bayswater power station in the Hunter Region had three units out, the now ageing Liddell generator ‎had one unit out, with Mt Piper also having its two units out. In addition, Vales Point coal generator had one of its two units out. The outages put the network at full capacity, with peak demand in the state outstripping supply and sparking a surge in spot prices. The combined result caused spot prices to skyrocket, and over the two following months, this has flowed into contracted rates – with South Australia and Victoria being hit the hardest.

New South Wales experienced a Cal 19 wholesale electricity price increase of 13 percent from July to the end of August. That upward trend accelerated markedly in the last fortnight.

Prices are still approximately 7 percent higher than what they were in 2017. This is reflected in the rates that are currently being offered by retailers to large market electricity customers in New South Wales.

The combination of planned and unplanned outages across the fleet during the week of 4-10 June resulted in very low black coal-fired generator availability. Tight supply conditions during this week contributed to electricity price volatility and higher New South Wales prices over the end of Q2. While Hydro generation substantially increased in Q2 2018, 663 MW higher (+43%) on average than in Q2 2017, it did little to kerb NSW volatility.

AEMO said in a statement that “The energy system is undergoing unprecedented transformation. With the recent exit of almost 5,000 megawatts of generation in the last decade, Australia does not have the energy reserves it once had to lean on in times of need.”

AEMO reiterated its concerns about the planned retirement of AGL’s Liddell coal-fired power generator in 2022, saying there was a need to “ensure a reliable portfolio of resources”. It also provided its support behind the federal government’s planned National Energy Guarantee, which has reliability components built into the policy.

In a recent presentation attended by Energy and Management Services, a member of the Energy Security Board stated that while there remained uncertainty around whether the National Energy Guarantee would come to fruition, especially with the recent change in PM, the Board’s role to coordinate the implementation of the reform blueprint remained unchanged at this point in time.

New South Wales and South Australia are planning to build an interconnector between the two states, which should see exports of wind and solar generation to NSW. On the flipside, if supply is short in South Australia, it will be able to import electricity from NSW, rather than relying solely on the Victoria interconnector.

Futures prices in Queensland fared better than neighbouring NSW although there remained a significant percentage increased from July to the end of August, at a rate of 6.5 percent. Like the rest of the market, the upward trend began in early July and continued to climb through late July and into August. The Queensland black coal-fired fleet were mixed, recording increased availability and generation compared to Q2 2017, but a slight reduction in generation compared to Q1 2018. The largest increases in generation compared to Q2 2017 were at Gladstone and Millmerran power stations (+297 MW and 288 MW, respectively), reflecting increased availability at lower prices. Unlike NSW, Brown coal-fired generation was steady compared to Q2 2017, reflecting few outages during the quarter. The one exception was at Yallourn Power Station which had at least one unit on a planned outage for 75% of the quarter. While Q3 has already seen Stanwell unit 3 trip and Kogan Creek power station temporarily decrease, wholesale electricity prices have continued to rally.

Cal 19 wholesale futures prices in Queensland are approximately 3.4 percent higher than what they were in 2017. This is reflected in the rates that are currently being offered by retailers to large market electricity customers in Queensland.

While heavily dependent on coal, Queensland has 2,093 MW of renewable energy projects currently under construction and aims to have 21 percent of its energy needs met by renewable sources by 2021.

Like NSW, Queensland’s rural farmers have been hit hard by the drought and demand for electricity for irrigation pushed demand, and therefore prices, up even further.

Queensland was also the worst state to be hit by “creative” bidding by coal fired generators and this has hindered reducing volatility, with the main culprits being the state-owned energy generators Stanwell and CS Energy. The issue was such that the State Government intervened.

By early June, South Australia Cal 19 wholesale electricity prices dropped by 5 percent compared to the start of 2018. This trend bucked in early July, sneaking back up and as of the beginning of September, futures prices at the time were only slightly higher than they were 12 months ago.

Wind generation was up an average of 546 MW (+61%). 392 MW of this increase came from existing wind farms due to improved wind conditions (Q2 2017 had comparatively low wind conditions), with the remainder (154 MW) coming from new capacity which has commenced generation since Q2 2017.

South Australia is regarded as one of the world leaders in renewable energy projects with 664 MW of wind and 175 MW of solar generation in the state. However, it is still reliant on costly gas generators, which supply in the region of 600 MW of power.

The state has a huge pipeline of solar, wind and battery storage projects lined up as the cost of building them continues to drop sharply.

Victoria was one of the states hardest hit by spikes in wholesale electricity futures prices. Cal 19 future rates have gone up by approximately 13.26 percent since 1 July. Because of the reliance on the interconnection to Tasmania for peaking power, which went down for a short period recently, the market is pricing in the risk that the interconnector may go down during the Summer peak.

Cal 19 future prices in Victoria are still almost 10 percent higher than they were 12 months ago and remains to be the state which is experiencing the biggest price increase since the energy crisis kicked in back in 2016. This is reflected in the rates that are currently being offered by retailers to large market electricity customers in Victoria.

Over Q2 2018 Victoria recorded increased hydro generation of 81 MW driven predominantly by increased availability of lower priced capacity from Snowy Hydro. Victorian coal power station failures continued to put NEM reliability at risk. Brown coal is baseload at around 4.7 GW but is not however, entirely stable. In winter there are 2 demand peaks per day which are usually covered by hydro power and gas power plants with solar power in between. There are many price peaks – some of which (but not all) seem to be related to irregular brown coal output.

Across the NEM, the average Q2 2018 rooftop PV generation increased from 562 MW to 669 MW (+19%) when compared to Q2 2017 (Figure 11). The largest increase was in New South Wales (+27%), with Queensland (+19%), Tasmania (+18%), Victoria (+13%), and South Australia (12%) also experiencing large increases. Interestingly, the VIC Government recently updated the regulations around small-scale renewable energy via the General Exemption Amendment Order and has now made it possible for households to access roof-top solar panels via solar power purchase agreements (PPAs). In addition, businesses can establish solar PPAs in different ways but in principle it requires the solar company and the consumer to enter into a long-term agreement to purchase power from the installed system. The consumer pays the solar company for the metered electricity generated by the panels, and the solar company can on-sell any excess solar electricity to the grid. 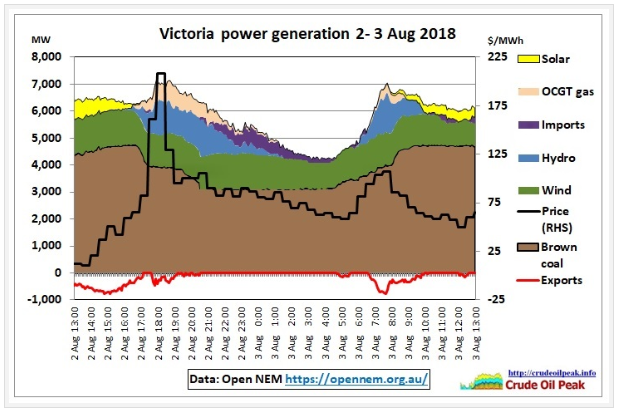 The wholesale price setting dynamics in Q2 2018 were representative of the shifts in the supply mix, with hydro generation setting the price more often than in previous quarters in all NEM regions. Figure 1 highlights the changes in price setting outcomes compared to Q1 2018 and Q2 2017.

Overall, while it is generally acknowledged that the NEM is experiencing unprecedented transformation, the ride has certainly been bumpier than expected. The movements in Federal Government have not helped to settle the market and won’t provide any positive influence until they can provide substantial energy policy with clear and defined parameters. There have been calls from speculators for the State Governments to take the mantle upon themselves to address energy policy while the Federal Government continue to appear to be bumbling about with a cohesive, comprehensive and generally acceptable policy. However, this could bring about a worse outcome if a collaborative solution is not the agreed response. With significant renewable generation projects still to come on line, clear strategy needs to outline how the transition to the ‘new’ NEM will occur while controlling costs and maintaining security of supply. Minister for Reducing Power Prices, it’s over to you…we are all waiting with great anticipation.